The Iron Age hillfort known as Uffington Castle occupies the summit of Whitehorse Hill. It consists of a large enclosure, measuring about 220 metres by 160 metres, surrounded by a wide chalk-stone bank or inner rampart about 12 metres wide and 2.5 metres high, and formerly lined with sarsen (sandstone) stones.

Around this is a grass-covered ditch about 3 metres deep and a further, smaller bank forming an outer rampart. A causeway, flanked by the out-turned ends of the inner rampart, provides an entrance to the site from the west. This would have been closed by a gate.

Postholes and pits revealed during archaeological excavations serve as evidence of structures built within the enclosure during the hillfort’s occupation, while pottery and coins have been found in burial chambers close by.

The Iron Age buildings are likely to have been large round huts, each housing an extended family group. In the Middle Ages the land within the enclosure was ploughed and earthworks mark the ridge and furrow pattern of cultivation.

Large Iron Age hillforts are rare. Most are located on the high chalklands of the southern counties of England, and Uffington Castle is regarded as an outstanding example. [extract from English Heritage]

An old legend says that the hill was so named because it was the site of the great battle between St. George and the Dragon. When St. George finally struck the fatal blow, the dragon’s blood gushed out onto the hilltop and, as everyone can see today, the grass has refused to grow there ever since. The White Horse is supposed to really represent the Dragon. The Rev. Francis Wise mentioned the story in his writings of 1738. Earlier, in about 1670, the antiquarian, John Aubrey, had thought it to be a burial mound and suggested, in his ‘Monumenta Britannica’ (c.1670), that King Arthur’s father, Uther Pendragon, might have fought the Saxons in the region and been buried there. Such battle stories probably inspired an alternative legend stating that the blood was that of Danish invaders. The hill certainly resembles a later Norman motte castle. It is the burial mound theory, however, which probably produced the hill’s present name, since dragon’s were thought to be treasure guardians and appear as such in other place-names like Drakenhorde field in Garsington (Oxfordshire).

In a 10th century charter, the hill is given its original name of Eccles Beorh, that is ‘Church Barrow’. This may suggest that a Christian religious building once stood on the summit. Perhaps it was used to convert a pagan site used in the worship of the Celtic god associated with the nearby White Horse. 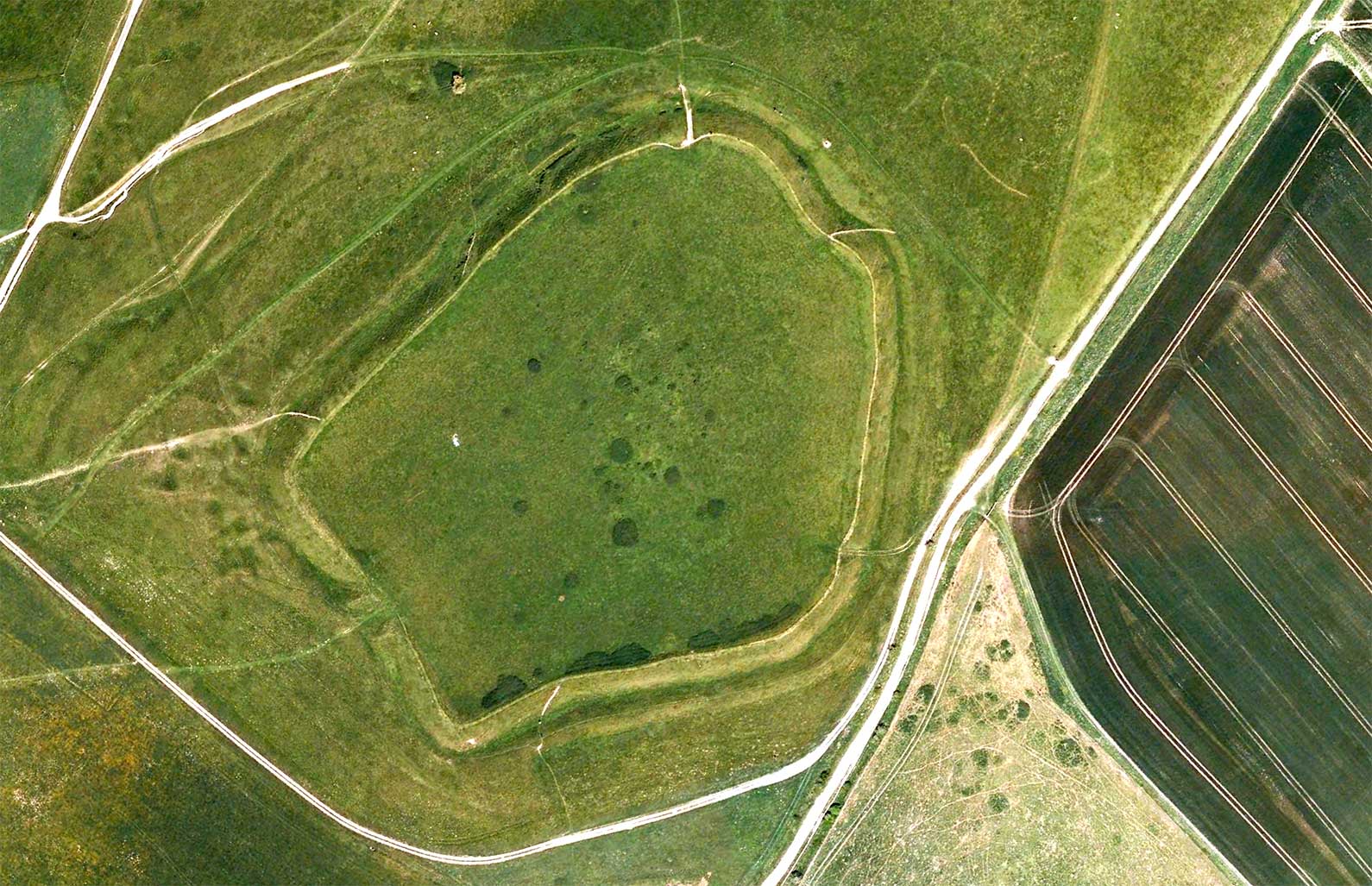 HER: Oxfordshire 7304
NMR: SU 28 NE 6
SM: 1008412
NGR: SU 2995 8633
Status: Confirmed
View Full Record
View on WikiData
Summary: Near the village of Uffington, on White Horse Hill, a dominant position overlooking the Vale of the White Horse to the N and the Berkshire Downs to the S. In Aubrey’s Monumenta Britannica (1665-93). Associated with the complex of monuments on the hill, especially the Uffington White Horse and Dragon Hill. A well preserved (National Trust) D-shaped enclosure of 3.2ha, univallate with ditch and counterscarp bank for entire circuit, Blocked entrance to the E which was originally a passageway with guard chambers, original entrance to W which is out-turned and links with enlarged counterscarp bank, two breaks through the rampart at NE and SE which are probably Romano-British. Geophysics and excavation (Miles et al 2003) have revealed internal features and dated the ramparts to two phases: box rampart c.8th/7th century BC, dump rampart c.4th century BC. Romano-British re-use of the enclosure, 2nd-4th centuries AD.