The substantial upstanding earthworks northwest of Castle Lane and north of Market Street, known as Castle Hill, are the remains of an Iron Age fort and a medieval motte and bailey castle. Little is known about the Iron Age settlement. Excavation across the ramparts in 1962 confirmed that both the outer ditch and the outer rampart and ditch were constructed in the Iron Age.

Limited investigation in the bailey at this time also confirmed that there was Iron Age occupation in the interior, recording pits, gullies and post holes. However, much more extensive investigations would be required in order to ascertain the nature of this occupation. Additional excavation between 1985 and 1986 east of Castle Lane, within the grounds of Ford Place (NHER 5940), has recorded further Iron Age features within the projected line of the earthworks.

The motte and bailey castle is believed to have been constructed shortly after the Norman Conquest, either by Ralph Guader, Earl of East Anglia until his rebellion in 1076, or by Roger Bigod, his successor as Earl. At the time of the Domesday survey, Thetford was among the six largest and most populous towns in the country and would have been dominated by the castle, which was situated in a position to control important crossings of the rivers Thet and Ouse.

The motte consists of a large circular mound encircled by a ditch. At the summit of the mound, a sub-rectangular platform surrounded by a bank of chalk rubble has been identified. It has been suggested that the platform may have supported a timber tower and the bank may have been the footing for a wall or a timber palisade. To the east of the motte is an area of open, level ground which formed the bailey. The north side of the motte is enclosed by a very large double bank and ditch, extending from Rampart Way to Castle Lane. The bailey was entered via a causeway across the northeast side of the earthworks. A sketch plan drawn by Tom Martin in the early 18th century depicts a bank extending east of Castle Lane and turning south, enclosing a sub-rectangular building. These remains were leveled around 1772, but the in-filled inner and outer ditches likely remain as buried features.

Remains of the outer ditch were observed within a foundation trench east of Castle Lane in 1987, confirming that the earthworks ran southeastwards to the river Thet. The early 18th century drawing also depicts continuation of the bank to the southwest of the motte.

The southern side of the castle would have been protected by the river Thet and its marshy flood plain. [extract from Heritage Norfolk]

Local medieval tradition suggested that the mound had been made by the devil, after he completed the dykes at Narborough and Newmarket, but by the Victorian period academics had concluded that the mound was either of Celtic or Norman origin, with late Victorian scholars correctly concluding that the Norman period was the most likely. Other traditions claimed that the mound covered a palace filled with treasure, or six silver bells from Thetford Priory. 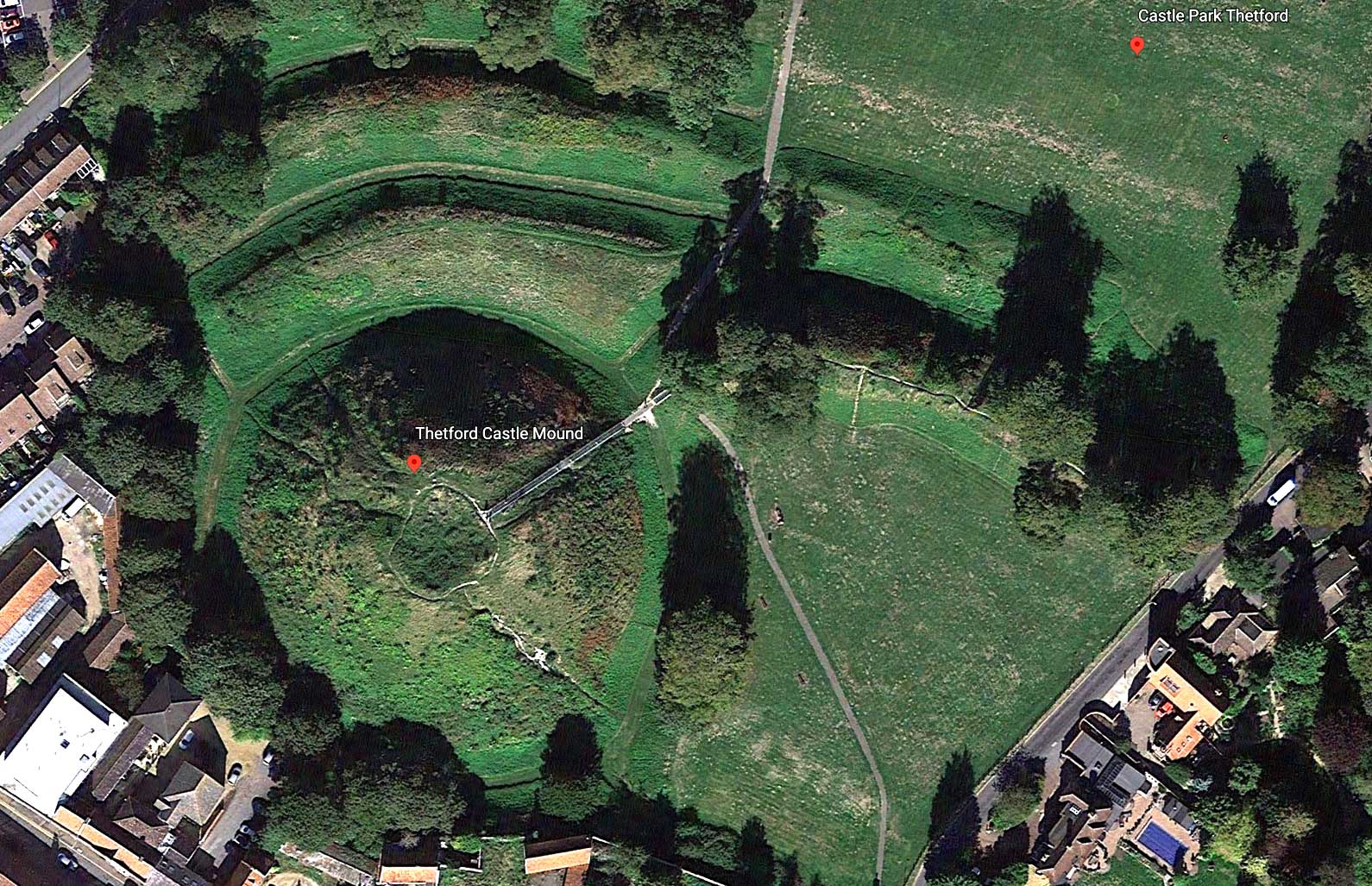 HER: Norfolk 5747
NMR: TL 8 8 SE 123
SM: 1017670
NGR: TL 8745 8275
Status: Confirmed
View Full Record
View on WikiData
Summary: Within Thetford on Castle Hill overlooking the confluence of the Rivers Thet and Little Ouse and the crossing of the Icknield Way. A Norman Motte and Bailey castle re-uses the bi-vallate Iron Age ramparts to the N and NE, it has been shown by excavation in 1962 and 1985-6 (Davies and Gregory 1991; Cushion and Davison 2003) that this was an inland promontory fort utilising a loop in the River Thet around its S side where there were no ramparts, possibly enclosing 7.5ha. Break through the ramparts in the middle to the N as followed by the present path may be an original entrance. On 1st Ed OS map (1885-1900). Sporadic Iron Age finds since the 18th century. The 1962 excavations across the ramparts to the NE showed a complex sequence with extensive medieval re-modelling of the Iron Age ramparts and ditches. The original outer ditch appears to have been about 13m wide at the top, 4m deep with a flat bottom, the inner ditch smaller and round-bottomed, the two ramparts consisted of layers of chalk rubble and loam. Excavation in the interior, small amounts in 1962 with larger areas to the S in 1985-6 (with geophysics), show pits, postholes, gullies with Iron Age pottery, other artefacts, human bone and a cremation. Dating is difficult but suggested to be middle Iron Age and perhaps a short duration of occupation.